Arguments for Life on Mars

These are the questions that millions of people have asked since Percival Lowell first announced in 1895 that the deep ravines and 'canals' on Mars were created by intelligent beings. As humanity began studying The Red Planet they were ultimately able to refute this popular assertion, but whole generations grew up with tales of Martians and little green men. It led to fascination and hope that humanity was not alone in the universe.

The hope that intelligent beings lived on Mars was dashed in July 1965 when Mariner 4 flew past Mars and took the first close-up photographs of the Martian surface. Those pictures showed a desolate planet that resembles the Moon with its barren landscape and essential lack of atmosphere.
For those that still had hope that intelligent life once existed on Mars they became excited by the clear pictures taken by Mariner 9 in 1972, which gave evidence that water had once been abundant on the Martian surface. In the years since photos from other satellites orbiting Mars also led scientists to the same conclusion, that liquid water had once covered much of the Martian surface, but that it was now unable to exist on the surface. So while it was concluded that intelligent life was not present on Mars, the scientific community and the world at large still held out hope that some form of life existed on The Red Planet.

Evidence that Liquid Water Once Existed on the Martian Surface. 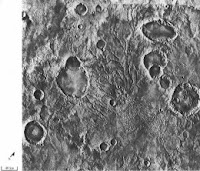 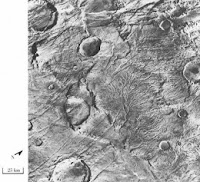 More about Water on Mars


Evidence of Past Water Provides Hope

The evidence that water had one existed on the Martian surface gave scientists and the populous hope that life might have existed on Mars as well. However, scientists briefly had their hopes dashed when NASA's Viking Program brought soil samples from the Martian surface back to Earth. They could not discover any microbial life or evidence that life could actually exist in the soil of Mars. These findings were disputed though; many people believed that the method used to bring the samples back to Earth had killed any proof of life. Scientists and people everywhere were once again hopeful.
So if water had once existed on the Martian surface, perhaps it was possible that microbial life had existed as well. And if it was possible that microbial life had existed, why couldn't it still exist? Scientists were doubtful that it could still exist because the conditions are Mars were so severe that no known life could tolerate them.

The Discovery of New Life

This was the common consensus until a discovery on Earth led scientists to redefine the necessary parameters for life. In late 2010 NASA discovered bacteria in Mono Lake, California that did not use all the elements previously thought necessary to sustain life. The bacterium replaced phosphorous with arsenic, an element that was previously considered toxic and an impediment to life.


This opened new doors; if life could exist by relying on an element as 'toxic' as arsenic, then life could also probably exist in conditions that we had previously deemed inhospitable. As Felisa Wolfe-Simon, a biochemist with NASA said "life-as-we-know-it could be much more flexible than we generally assume or can imagine," thus it becomes necessary for scientists to reassess the necessary parameters for what constitutes a hospitable environment. Perhaps Mars, which had an environment that was once deemed inhospitable, was actually teeming with a different type of life, one that had adapted to the extreme conditions caused by frigid temperatures and lack of atmospheric pressure.

Emissions of a Lifelike Nature


Scientists began seeing methane releases from Mars in 2003, and have continued to see evidence of Methan emissions since then. Sushil Atreya, an astrobiologist that has worked in conjunction with NASA, explains the possible sources of methane. "Either it's geology, in which case it's the reaction between water and rock, or it's biology, in which case the microbes are producing the methane."
It was in 2009 that NASA was finally able to see that it was only during particular seasons that methane was being produced. On the Northern Hemisphere methane is being released in mid-summer and in the Southern Hemisphere it is being released in early spring. They were also able to determine that the methane was being emitted from vents in the planets surface.


It is hoped that the Mars Science Laboratory, Curiosity, will be able to discover the source of these mysterious methane emissions when it lands at Gale Crater in August of 2012.

Ending the Debate About Life on Mars


Curiosity is set to land at Gale Crater in August of 2012. It is hoped that when it does it will be able to determine if and when life existed on the Martian surface. It will also attempt to investigate sources of methane and attempt to determine whether liquid water exists under the Martian surface. Humanity may soon be able to answer the questions, "Are we alone?" and "Is life a natural phenomena in the universe?" These two questions have plagued Man for centuries. Their answer might be just around the corner, but are we ready to hear it?


“This dramatic confirmation of standing water in Mars' history builds on a progression of discoveries about that most earthlike of alien planets. This result gives us impetus to expand our ambitious program of exploring Mars to learn whether microbes have ever lived there and, ultimately, whether we can.” - Edward J. Weiler, NASA, Associate Administrator for the Science Mission Directorate
Posted by Geaney
Labels: Astronomy, Go to Mars, Is there life on Mars?, Life on Mars, Manned Exploration of Mars, Mars methane, Mars Science Laboratory, Mars Travel, Methane on Mars, NASA Mars, Science, Space, water on Mars