Tweet
"The cost… is fundamentally what's holding us back from becoming a space traveling civilization and ultimately a multi-planet species."
-Elon Musk, Founder, CTO, and CEO of SpaceX

For private space missions and projects the biggest obstacle is often funding. With a few exceptions, most space companies have been started by someone with a lot of personal capital, otherwise they would have no way to get their company off the ground. Space research and development is an expensive business and most private space companies must vigorously pursue government grants if they have any hope of becoming competitive.

So what happens when the government doesn't take an interest in a space company's projects?

They die. The space company might struggle along with personal funds, but eventually they need government support to sustain the research, development, and testing necessary to remain relevant.

Is there no other way? Is the government the only entity that can provide funding for space projects and missions?

Right now the government is virtually the only consistent customer for anything more than satellite launches  They are the only entity that will fund space projects and missions for the sake of research and development.

There is an alternative to government funding, but it requires space companies to develop a completely new Public Relations (PR) strategy.

Space missions receive enormous publicity, with millions of people viewing or reading about even the most inconsequential of them. Most major news networks have at least one article about every launch that takes place. With each of those articles is a photo that relates to the mission, whether it be of the launch or the spacecraft itself.

Big missions receive even more publicity. For example, in less than two days following the touchdown of Mars Exploration Rover Spirit, NASA's homepage received 513 million hits. (Weiss) That doesn't include the views from all the other sites that ran stories on Spirit.

Every major news network has articles on the Mars Exploration Rovers whenever they make a significant discovery. Usually included with those articles or TV coverage is an image of the rover, like the one on the right of Opportunity.

This image has been viewed hundreds of millions, if not billions of times.

If space companies ran PR campaigns that emphasized how popular space missions are and have the potential to be, they could receive sponsors from corporations around the world that are seeking to increase their own publicity.

Don't believe me? Just look at NASCAR. High estimates give NASCAR around 80 million fans in the United States. The 2011 Sprint Cup received an average of 6.5 million viewers. Corporations will spend upwards of 20 million dollars a year to have their logo prominently displayed on one of the cars. The teams often receive multiple sponsors for the same car with one sponsor paying more to have their logo dominate the car. 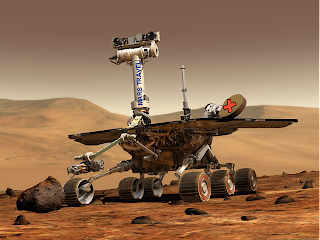 Now what if a highly anticipated space mission was sponsored by a corporation? Let's use Mars Exploration Rover Opportunity as an example again. What if it had some corporations sponsor it in return for getting their logo on the rover? Let's pretend Mars Travel and Company X sponsored it. It might look something like the image to the left.

Don't you think corporations would be willing to pay a lot of money for the publicity and exposure that would get them? How much do you think they would pay? $100 million? Maybe even $500 million? Or what about $1 billion?

Why not? After all, many corporations have shown a willingness to pay around $20 million a year for their logo on a NASCAR vehicle.

NASA is a government entity and there are laws against this sort of advertising, but what about private space companies? Why haven't they started getting sponsors? They could receive funding from many different companies, eliminating the monopoly the government has on the decision making process for almost all space missions.

So it might look a little tacky to have WAL-MART or DELL on a spacecraft, but why does that even matter? Does it matter who profits from space exploration if everyone benefits?

It doesn't make a difference if a discovery is made by the Sony rover or Opportunity, either way a discovery has been made. If a company helps pay for a space mission or project, who cares if they get publicity from it. Humanity would be able to have missions that aren't restricted by what one group wants.

How can space companies make this happen?

They need to start emphasizing the amount of public interest in their missions. they need to have a PR campaign showing just how fascinated people are with them. Once this is established they need to go to corporations and say, "Hey, we can give you massive publicity if you help us fund this mission." Corporations have shown that they are willing to pay millions to have their logo put in front of an audience, so why not use that to fund really awesome space missions?

I'll leave you with this: