Tweet
Arsia Mons measures nearly 16km (12mi) high and over 435km (270mi) wide, with a caldera (opening) measuring 110km (72mi) in diameter It is the southernmost of the Tharsis Trio, which also consists of Pavonis Mons to the north and Ascraeus Mons to the north of that. 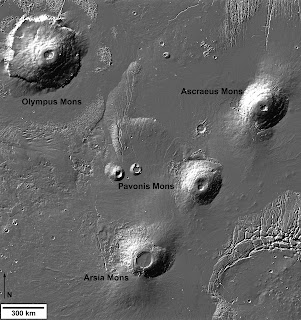 While Arsia Mons may be larger than any volcano on Earth, it pales in comparison to the largest volcano yet discovered in the solar system, Olympus Mons, which measures 22km (16mi) high. Coincidentally Olympus Mons is relatively close to the Tharsis Trio (right).

These volcanoes lie in the Tharsis Quadrangle on Mars, which contains an abundance of volcanoes. The region is thought to have been volcanically active as recently as 100-250 million years ago, which is relatively recent in geological terms.Scientists believe that the abundance of volcanoes in this region had an astronomical impact on the climate of Mars because the carbon dioxide and water vapor emitted from them would have been enough to create an atmosphere thicker than that on Earth!

This means that the environment we currently see on Mars may be drastically different than what it used to be! The Tharsis volcanoes would have had a direct impact on that, so determining how long ago they were active will help scientists to determine at which point the Martian climate changed!

To determine this timeframe scientists will have to examine the vents through which lava and heat escaped Arsia Mons. These vents (left) line up with Pavonis and Ascraeus Mons to the Northeast, which may be indicative of a larger fracture/vent system that caused the initial eruptions that created the Tharsis Trio. Examining the vents can also help scientists determine how and why the volcanoes formed in the first place. Understanding this could give us insight into what happens below the Martian surface, which could help scientists to determine whether conditions under the surface make/made it more hospitable to life than the surface!

Arsia Mons offers some great opportunities if/when we decide to examine what lies beneath the barren surface. Below you can see several suspected entrances to underground caverns on Mars, and all of them lie on Arsia Mons! These entrances (called skylights) might eventually be targets for future manned or unmanned missions to Mars that hope to study the conditions in underground lava tubes and caverns. The lava tube entrances on Arsia Mons have been named (see the caption) to better differentiate them from one another..

One of the pluses of exploring these underground caverns is that explorers (human or robotic) would be shielded from the cosmic radiation that bombards the surface. This same radiation may be responsible for the lack of life on the surface because such heavy doses of radiation makes it very hard for life as we know it to survive. There is no doubt that underground caverns like those we see entrances to on Arsia Mons, will one day be the target of missions to Mars!

Even if we don't send a mission to Arsia Mons anytime soon we'll still have some remarkable images to look at, like the one below, which shows a crater on Arsia Mons that has been filled in but somehow kept an almost entirely intact rim! Most of the time lava will erase all traces that a crater even existed, but not in this case!


Every year just before the Southern Winter on Mars an unusual weather phenomena occurs on Arsia Mons. The sunlight heats up the air, which rises and brings some dust with it. The dust then coalesces over the caldera (opening) of Arsia Mons to form a spiral dust cloud thick enough to be seen from orbit. The spiral dust cloud can tower 15-30km (9-19mi) above the volcano and occurs around the same time every year.

You didn't know Arsia Mons was so extraordinary, did you?