Tweet
Recently, Russian citizen scientists claimed to have found the remnants of the failed Mars 3 Lander, which landed on Mars on December 2 1971, but had a communication failure after transmitting for only 14.5 seconds. This speculation led the Mars Reconnaissance Orbiter Team to further investigate the proposed sites on March 10 2013. Below you will see an image explaining what they investigated. To see the enlarged version from HiRISE simply click on the image below. 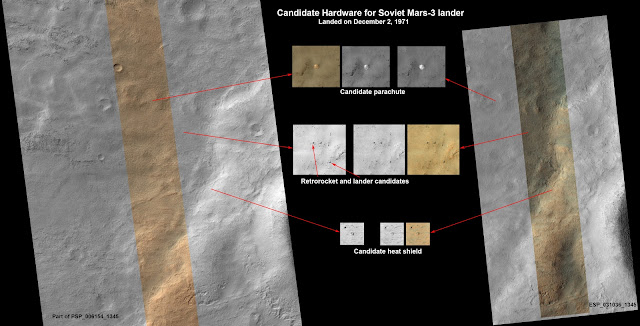 The candidiate descent module/retrorocket can be seen in the image above as well. It had a 4.5 meter chain attaching it to the lander, which is also visible. While the line is 4.8 meters, this difference could be explained if one assumes that it's momentum dragged it slightly across the surface. To best see this feature you will need to view the larger image from HiRISE by clicking on the image above.

The candidate site for the parachute can be seen below. I'm betting you can guess where it is even in this small version, but if you can't just click on it to see the larger high defintion image from HiRISE. 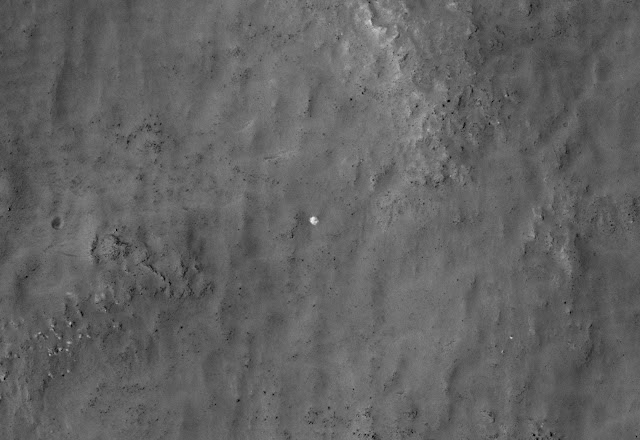 The parachute is the unusually bright spot right in the center of the image, which measures approximately 7.5 meters in diameter. Mars 3 had a paerachute that measured 11 meters in diameter if fully spread out, so a 7.5 meter diameter is consistent in that the parachute would most likely not be completely unfurled. In previous images of the area the parachute was likely covered in dust because the bright spot seen in the most recent image was not there. It's likely that the wind blew dust off the parachute recently, making its white color stand out against the backdrop of the Martian surface.

In 2007 HiRISE took an image of the the predicted landing site for the Mars-3 lander in Ptolemaeus Crater, but according to their website that image "contains 1.8 billion pixels of data, so about 2,500 typical computer screens would be needed to view the entire image at full resolution. Promising candidates for the hardware from Mars 3 were found only very recently." (HiRISE 2013)

The Russian citizen scientists were members of Russia's largest online community about Mars Science Laboratory Curiosity, started by Vitali Erogov. They crowdsourced the preliminary research that led to finding the candidate site for Mars 3. Vitali Erogov then compiled the below graphic of the candidate Mars 3 hardware pieces. 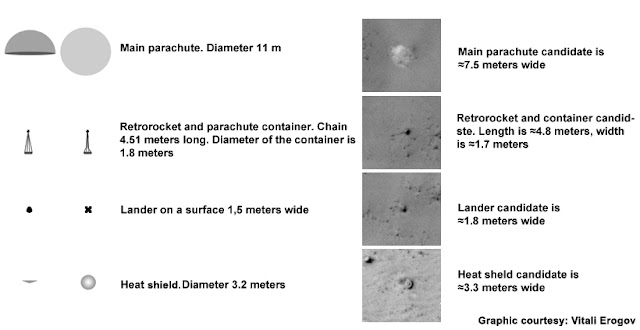 While all of these images match to what would be expected of the corresponding hardware, there is still some investigation to be done. Further analysis of the data, as well as current and future images, will help scientists to verify these findings and potentially determine what caused the communication failure in the first place. While the latter is a long-shot, you never know! For right now though, it looks like we have finally discovered Mars 3!

One of the biggest programs, whose participants have made numerous historic discoveries is Planet Hunters, which enlists people like you to help discover new planets. Planet Hunters has had and will continue to have enormous impact not only on the scientific community, but on all of mankind, as one day we must find a planet that we can survive on and colonize it, else we keep the fat eof our entire species tied to that of a single planet or solar system.