On Earth, when a riverbed dries out it leaves a depression, or indentation in the Earth.


So then why on Mars are riverbeds and lakes inverted, or raised features, like in the below image of Gorgonum Basin?

It all comes down to erosion. The weight of the water condenses and compacts the sediment beneath it, making it much harder and more resistant to wear from erosion. Thus, over the course of millions (and sometimes billions) of years, the ground surrounding the river bed gets eroded much more rapidly than the riverbed itself. This results in the inverted features that you see on Mars today.
Posted by Geaney 0 comments
Labels: Gorgonum Basin, Iani Chaos, Inverted features, Inverted Riverbed, lake on Mars, Riverbed on Mars

Tweet
In a new article published in the journal Nature, researchers from Belgium, France and Japan offer  a new theory on how Phobos and Deimos came to be. They suggest that there was a a giant impact with Mars that created a debris ring around the planet. This inner part of the debris ring would have hosted the preponderance of material and included at least one moon with a diameter of around 200km. Meanwhile the outer ring held less debris, which through the gravitational influence of the large moon could have eventually clumped together to form Phobos and Deimos.


So then what became of the large, 200km moon? This new theory suggests that it crashed back into Mars, splitting into hundreds of small parts that then disintegrated as they fell through the atmosphere, with some of the larger pieces leaving small impact craters on the surface.

Tweet
Right now there are 6 people currently in space aboard the ISS, travelling at 5 miles per second (just over 8 km per second). They orbit the Earth once every 90 minutes. Remarkable huh? (Click to enlarge) 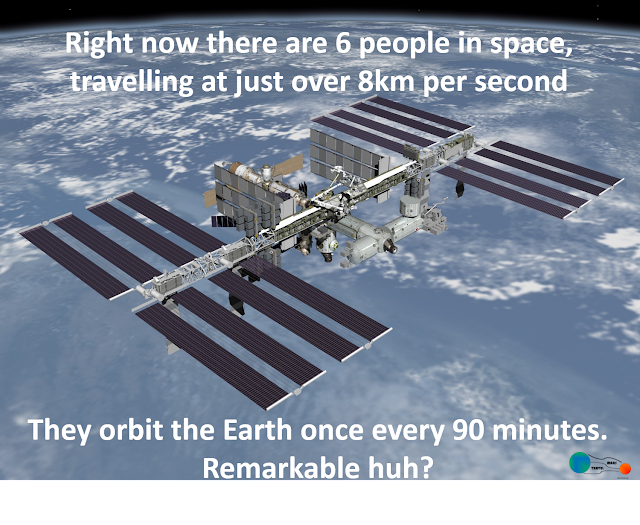 Please spread this and other space material far and wide so we can help raise public awareness and excitement for space exploration and discovery. A good starting point would be to use this image as a flier and post it within your local community, or on your social media. The more space advocates we create, the louder our voice will be!